Throughout an unusual career, Joane Hétu has carved her own place on the Canadian creative music scene. A woman of reason and passion, she mostly expresses her art through the voice and the alto sax, two instruments she approaches in a similar way, bringing into a unique symbiosis the flexibility of one and the urgency of the other. She is self-taught and played in the cutting-edge groups Wondeur Brass, Justine and Les Poules, whose resolutely avant-garde rock carried her throughout North America and Europe. Later she reinvented the sensual song format through the prism of musique actuelle with her own band Castor et compagnie. Since then, she has left rock music behind, but still flirts with song, particularly with the duo Nous perçons les oreilles, in which she continues to explore the narrow line between laughter and tears. 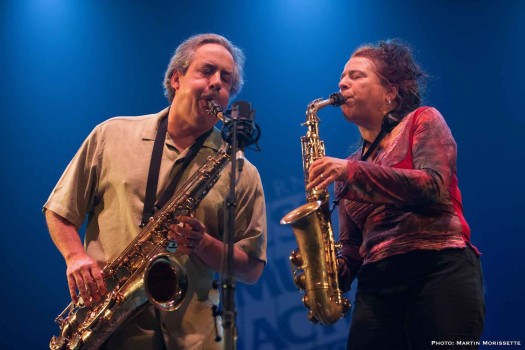 Active since the 1970s, the duo of Joane Hétu  and Jean Derome are Montreal’s First Family of modern jazz. With Diane Labrosse (sampler, keyboards) and drummer Pierre Tanguay, the quartet Castor et compagnie brings together Hétu’s music and texts, in a cycle of songs for lovers of senses, sense and sounds, noise and lyricism, pleasure and eroticism. The lyrics were inspired by the vocabulary of Hindu erotic books, Arabic love games and a few saucy songs. Their music is “daring and energetic, made of turbulent atmospheres, evocative lullabies and even love songs.” Composer/performer Hétu “takes the most obvious themes and makes them her own in surprising ways” (Hollow Ear, USA). In its unique blend of musical traditions, this quintet points new directions in jazz and song. Hétu returns with the quintet (with new addition Martel), all established performers in the Montreal’s vibrant improvised music scene, these artists have been busy creating that Montreal signature sound for decades… the epitome of Quebecoise art music with heart!