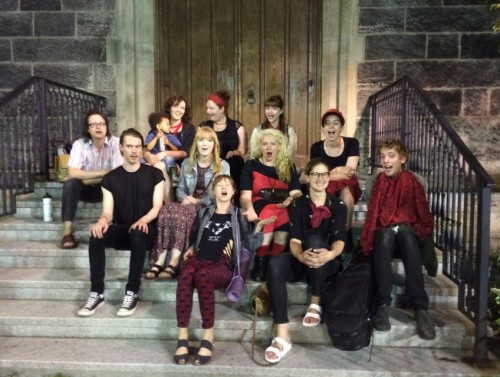 Lively, fun, adventurous, local vocal institution, weirdo singing group made up of dedicated and creative individuals…  Conductress Sarah Good plays the choir of 15-20 vocalists like an instrument. The group began 7 years ago and has focused on singing the most beautiful/ugly and interesting music it can find including pieces from the first era of polyphony, through TV themes to the 20th century minimalists encompassing singing traditions from around the world and also from outer space.

Limber, captivating, bodacious solo work by master-percussionist…
Tatsuya Nakatani is a creative artist / percussionist originally from Osaka, Japan who has released over sixty recordings in North America and Europe. Residing in the USA since 1994 he has performed countless solo percussion concerts and has collaborated with hundreds of artists in international music festivals, university concert halls, art museums and galleries. His latest project is the Nakatani Gong Orchestra, which builds community ensembles performing on multiple bowed gongs under his direction, as recently presented at the Kennedy Center in Washington, D.C.. Nakatani’s constant touring fosters the raw and fresh quality in his music, which can only survive through an open willingness to share energy, culture, music and self on a global human scale. His master classes and workshops at schools and universities, emphasize his unique musical approach and philosophy in creating visceral, non-linear music. He has created his own instrumentation, effectively inventing many instruments and extended techniques. He utilizes drums, gongs, cymbals, singing bowls, metal objects, bells, and various sticks and bows to create an intense, intuitively primitive, expressive music of unusually strong spirit that defies category or genre. His music is based in improvised / experimental music, jazz, free jazz, rock, and noise, yet retains the sense of space and beauty found in traditional Japanese folk music.

This exciting new ensemble includes the 2015 and 2016 Something Else! Festival Artists in Residence, Ellwood Epps trumpet, Scott Thomson trombone, as well as Erik Hove alto saxophone, Stéphane Diamantakiou double bass, Louis-Vincent Hamel drums, performing a warm, jubilant homage to expatriate South African jazz of 60s & 70s. The roots of South African kwela and gospel are intertwined with jazz and the avant-garde, with limbs and branches growing out to touch the world through the migration of its players, like Abdullah Ibrahim, Dudu Pukwana, Mongezi Feza, Johnny Dyani, as well as Don Cherry, William Parker and original music by the group. 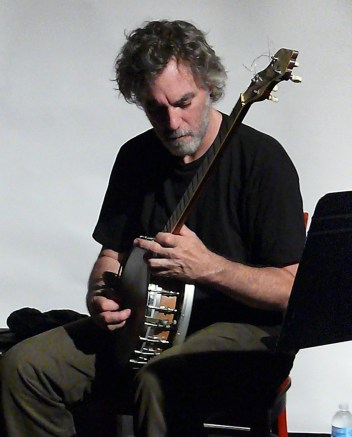 Multi-strings master Joe Morris has been an active participant in various scenes in North America, including New Haven, CT, New York & Boston. Morris has stated that his single-note technique was inspired more by traditional African music, and by saxophone players like Eric Dolphy and Jimmy Lyons, than by other guitarists. He cites as influences Cecil Taylor, Eric Dolphy, Leroy Jenkins, Thelonious Monk, Jimi Hendrix, and West African string music. In his solo work, he avoids distortion and guitar effects. He uses a serrated pick to “bow” the strings of his guitar and to create an otherworldly, harmonic-rich sound. He also plays banjo and banjo-uke, and since 2000 has concentrated on playing bass.

For the last 30 years and over the course of well over 50 albums recorded since the early 80’s, Morris has been creating a body of work that stands and walks with giants. It is his first-hand awareness of music’s ability to transform a listener’s mental state outside of the here and now, that has driven him to reach levels of virtuosity and a breadth of expression on guitar which are presently unsurpassed. The silk in the web he weaves is of the absolute finest grade. The web of music itself however, its intricacies and continually revealing patterns, prompts true awe.

Improvising Trans-Atlantic all-star quartet …viola, reeds, percussion! Each member is conscious of their own weight and power to add to the communal conversation, understanding silence and restraint can be as powerful a contribution to the whole as density. Ingrid Laubrock and Tom Rainey represent the best of the New York scene while Ab Baars and Ig Henneman are key members of the idiosyncratic Dutch improvised music community. Either duo showcases the kind of telepathic interplay that comes from years of dedicated playing. Together, the wealth of experience allows limitless possibilities.

“Perch Hen Brock & Rain creates a wide textural palette due to the clever deployment of resources, with the tough little string instrument often playing a strikingly aggressive role as a percussive engine that fires away tirelessly while the horns engage in intricate dialogue. True to its name, the group also produces a spectrum of sounds that vividly evokes nature and the animal kingdom, above all in the shrill, stark bird calls of the tenor saxophones and clarinet and the undergrowth rustlings of the drum kit, which Rainey works with consummate dexterity.”
-Kevin Le Gendre Jazzwise
Wels Music Unlimited 2014

with kind travel support from: