The 5th Annual
SOMETHING ELSE!
Festival of Creative Music 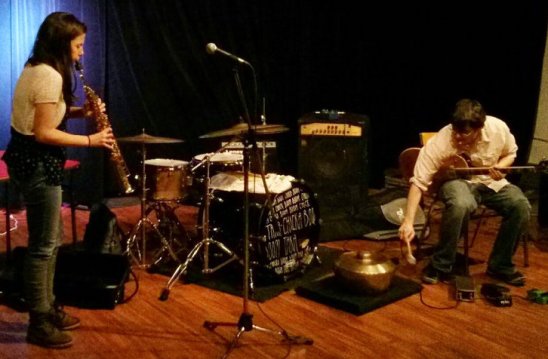 Don’t be afraid – it’s only FASTER! Faster is the Toronto duo of Kayla Milmine (soprano sax/vocals) and Brian Abbott (Guild Bluebird guitar with slide, pill bottle, alligator clips, toothpicks, cork, chains, chopsticks and picks plus a “fun assortment of pedals”). They play a mixture of free improvised music, jazz standards, and punk songs. In addition to music they also venture into performance art; in some of their live sets, they’ve performed with popcorn poppers, and done onstage carpentry in front of alternately frightened, confused, and ecstatic audiences. Together they craft a highly comedic cabaret “circusy” sound, like 2013’s self-produced digital release “These Cats Are Burnin” which includes whimsically abused jazz standards from (Duke Ellington’s) “Mood Indigo” or (Gershwin chestnut) “I Got Rhythm” to in-your-face punk mantra “Do You Want You Want.” All this, as Coral Andrews writes in The Record, is “just part of Faster’s jazz ‘n’ punk pundit style.”

Eucalyptus is a seven-piece group that “manages to combine the accessible and avant-garde in an appealing way,” writes Kerry Doole in Exclaim! Led by Toronto-based composer/saxophonist Brodie West, the band features an all-star lineup of musicians from Toronto’s improvising music community. Their eclectic style incorporates aspects of pop, jazz and the avant-garde. West’s compositions feature syncopated rhythms inspired by calypso, dancehall, and bossa nova, played with collective free improvisation reminiscent of Sun Ra, Globe Unity Orchestra, or the Art Ensemble of Chicago. Since forming in 2009, Eucalyptus has performed at many of Toronto’s most celebrated venues, including the Wavelength 12th Anniversary Festival, Open Roof Festival, Feast in the East, Long Winter, Toronto International Film Festival, Images Festival, The Music Gallery, Somewhere There Festival and Hirut Restaurant. They have also performed at Sappyfest 8 in Sackville NB. Their 10” vinyl EP/CD Eeeeuuuucaaaaaaallyyypppppttus is on Toronto’s Blocks Recording Club label.

The Vancouver Sun writes, “Gordon Grdina continues to passionately explore the depths of jazz improvisation, cross-cultural fusions and the fun that comes with cutting loose.” In this quartet, the Vancouver guitarist and oud player highlights three New York jazz virtuosi: saxophonist/clarinetist Oscar Noriega, who has worked with Lee Konitz, Anthony Braxton, Gerry Hemingway, Dewey Redman and Paul Motian. Pianist Russ Lossing has been praised for “… the wealth of his harmonic knowledge, the fluidity of his phrasing and his attention to the weight of every single note” (Jazzman Magazine, France). Drummer Satoshi Takeishi, after studying at Berklee, has become known as a producer and arranger as well as a percussionist. The result is a unique ensemble sound that John Garratt in pop matters called “bold and downright great.” In Grdina’s words, “I hear so many connections to so many genres in this music … I’ve gotten compliments from folk, jazz and classical music fans, as well as fans of Soundgarden.” 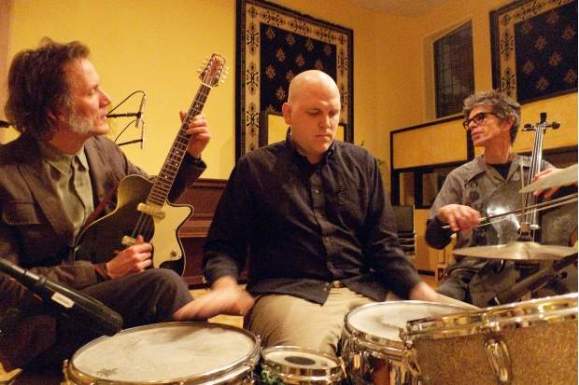 In 2012, the Stretch Orchestra won the coveted Canadian music award, the Juno, for “Instrumental Album of the Year.” This, however, is only part of the acclaim that the trio has garnered. In performance, they routinely traverse a wide gamut of musical styles—from jazz to rock to folk—often within a single tune. Guitarist Kevin Breit has performed with artists such as Norah Jones, Hugh Laurie, and Cassandra Wilson, as well as releasing a mountain of recordings under his own name. Matt Brubeck is an improvising cellist, raised on jazz and classically trained at Yale, who has taken his cello skills into sessions with Tom Waits, Sheryl Crow, and Yo-Yo Ma, as well as Canadian sessions with Marilyn Lerner, Nick Fraser, and David Braid. Jesse Stewart, this year’s Something Else! Improviser in Residence, has performed and/or recorded with a wide array of musicians including George Lewis, Roswell Rudd, Bill Dixon, William Parker, and Evan Parker.