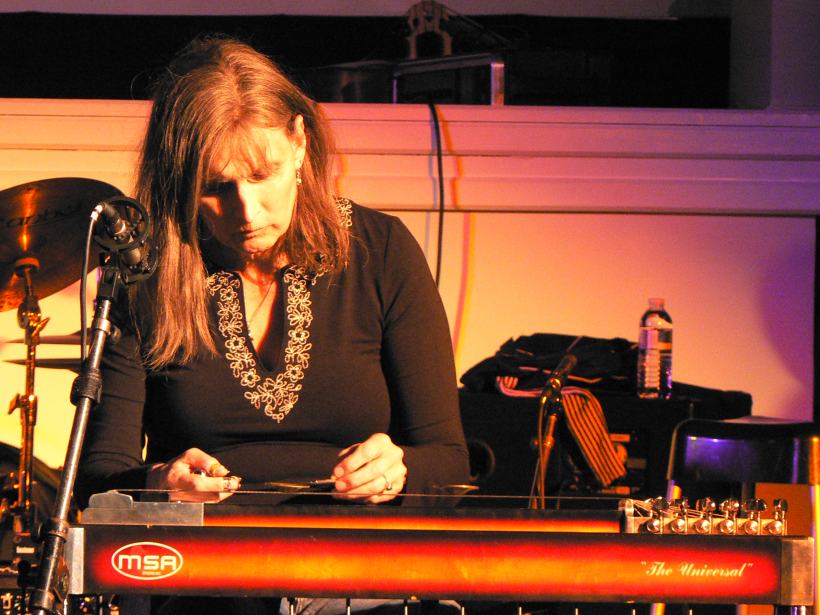 Composer, improviser, pedal steel guitarist SUSAN ALCORN came up playing country and western music, but her ear eventually led her down a decidedly more singular experimental path. “You’ve got to be naked in your mind to be able to play and express yourself… naked and fearless and that’s not easy.”

Having started out playing guitar at the age of twelve, she quickly immersed herself in folk music, blues, and the pop music of the 1960s. A chance encounter with blues musician Muddy Waters steered her towards playing slide guitar. By the time she was twenty-one, she had immersed herself in the pedal steel guitar, playing in country and western swing bands in Texas.

Soon, she began to combine the techniques of country-western pedal steel with her own extended techniques to form a personal style influenced by free jazz, avant-garde classical music, Indian ragas, Indigenous traditions, and various folk musics of the world. By the early 1990s her music began to show an influence of the holistic and feminist “deep listening” philosophies of Pauline Oliveros.

With its “chamber jazz” lineup of tenor & soprano saxophone (Connor Bennett), electric guitar (Chris Palmer) and double bass (David Lee), the exciting new trio, LEE/PALMER/BENNETT, has made a special niche for itself in Hamilton’s expanding new music scene. Radical New Zealand guitarist Palmer, saxophonist Bennett (known for his work in Haolin Munk and Eschaton) and bassist David Lee (veteran of such groups as Eric Stach, the Artists Jazz Band, and the Bill Smith Ensemble) take a variety of new approaches to planning and devising an especially focused and mature style of group improvisation. Acoustic music with electric intensity! 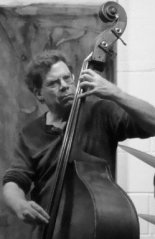 DAVID LEE is a writer and double bassist. Originally from BC, he spent years in the Toronto music and art scene, playing bass and cello in a variety of settings,  then moving to BC’s Sunshine Coast in the 1980s, and currently lives in Hamilton. The author of books on jazz and other subjects (winner of the 2007 Hamilton Literary Award for non-fiction for Chainsaws: A History), currently a PhD candidate in English at the University of Guelph, David sits on the curriculum committee of Guelph’s International Institute for Critical Studies in Improvisation. In 1996, while living in Pender Harbour, BC, he was part of the founding committee that launched the successful Pender Harbour Jazz Festival. In 2012 Tightrope Books of Toronto published David’s first novel, Commander Zero. Wolsak & Wynn recently published a newly revised edition of David’s critically-acclaimed jazz book The Battle of the Five Spot: Ornette Coleman and the New York Jazz Field. More recently, the Cthulhu mythos was brought to the mean streets of modern-day Hamilton with David’s young adult novel, The Midnight Games. 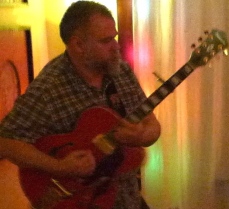 A truly original improvising guitarist with a keen sense of adventure, humour, fire, curiosity and mischief, New Zealander / Hamiltonian CHRIS PALMER can easily rock a house party or stun a literary audience, hypnotizing them with his charm and chops.  Palmer has been playing guitar for over thirty years in a variety of contexts. For over a decade before moving to Canada from New Zealand, he was actively involved in the Wellington improvised and avant-rock music scene. He has appeared on a number of albums including Leila Adu’s debut album ‘Dig a Hole’ and was largely to blame for the Elephant Men release, ‘Let You Entertain Me’.  He also featured in a, let’s say, ‘cult’ film by Young Guns II director Geoff Murphy… which he doesn’t want to talk about. 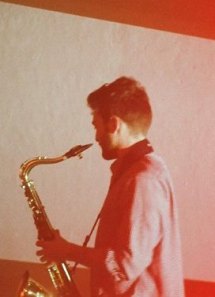 Hamilton multi-saxophonist, CONNOR BENNETT is perhaps best known for his part in Eschaton, an avant-thriller of a sound exploration duo (with Aaron Hutchinson), that leaves Hammer City folk baffled, overjoyed and awed on a regular basis.  Bennett has deep roots and ties in the city’s creative/experimental music scene, both as a performer in various units including the eclectic Haolin Munk and various improvising outfits, as well as being involved in Hamilton Audio/Visual Node.

This Toronto based quartet is dedicated to creating a unique voice through original compositions focusing on improvised/avant-garde music influenced by Ornette Coleman and Anthony Braxton among many others.