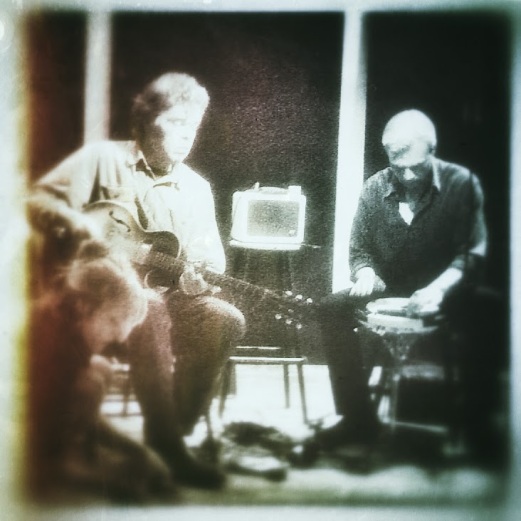 The Spokes brings together a range of talents to play a distinctive brand of free, cosmic blues. Guitarist Arthur Bull, with his tiny hollow-bodied Gibson, hails from Digby Neck, Nova Scotia, and has played with such luminaries as Roscoe Mitchell, the Bill Smith Ensemble, poet Paul Dutton and legendary British guitarist Mike Cooper. Percussionist Bob Vespaziani is active in both the Blues and Improvisational music scenes in Canada, playing with Snake Oil Johnson, Julian Fauth and Taki Oto. Bassist David Lee, familiar to Hamilton audiences from his work with Gary Barwin and his trio with Chris Palmer and Connor Bennett, also has a long musical resume, including work with such musicians as Al Neil, Joe McPhee and Leo Smith. Their special guest for these Hamilton performances will be local guitar whiz Chris Palmer. Scott Thomson wrote about Arthur Bull here.

John Oswald (alto saxophone) and our Listening Artist in Residence Scott Thomson (trombone) have been playing together since about 2001, most often at first in John’s living room and then in Scott’s ‘living room’ venue, Somewhere There (2007-10). The name JOUST is a fun little conceit that, at some point, they started using as a group-name for listings, a poster, or something else. JOUST almost never performs as a duo these days, since public performances are usually opportunities to invite others to join them, especially the ‘likes’ of Germaine “The Glue” Liu, David Prentice, Michel F. Côté, Martin Tétreault, and David Lee. Duly added to this list of august talent is Ben Grossman, the Guelph-based wizard of contemporary vielle-à-roue (hurdy gurdy), who will join John and Scott for their Hamilton show, much to their –– and listeners’ –– great fortune.

EW&C is a local weirdo singing group made up of mf (motherfucking) dedicated and creative individuals.  Conductress Sarah Good plays the choir like an instrument.  The group began 6 years ago and has focused on singing the most beautiful/ugly and interesting music it can find including pieces from the first era of polyphony, through TV themes to the 20th century minimalists encompassing singing traditions from around the world and also from outer space.